You are probably wondering what the title of this post is about. Well as you know if you have already explored around on this blog, I am a fan of the NFL Football Series. I wanted to create this site so you can support your team with a coffee mug of the NFL franchise. 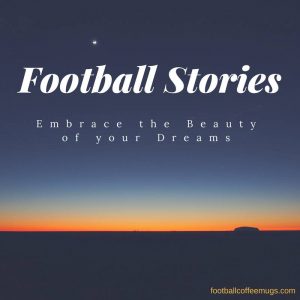 However, I have also came across some interesting stories that I would like to share with you about each of the teams, surrounding these football coffee mugs.

These stories I am going to share with you, are touching of the heart and soul. Some of these are amusing, and some well help you think for those whom are less fortunate than ourselves. Other story telling will be inspirational.

The emphasis of these stories based on the NFL football teams and how a gift of a coffee mug can help touch people’s lives for the better.

So you will be noticing in the coming weeks and months a series of stories for the football teams and how the coffee mug representing a team actually helped transformed someone’s life for the better.

This may sound bizarre on first hearing but you will be amazed on what goes on in a person’s life or a family. Often we overlook the simpler things in life we take for granted.

Some of these stories talk about helping those whom were contemplating suicide. While others helped bring a couple together and later married whom if it was not for the game, they may never have met.

Yes it is strange but true, we discuss how coffee mugs representing the football teams of the NFL, brought about interesting changes in people’s lives.

I look forward telling you of these stories. It is really a series of chapters reflecting each team.

While some of these stories are interesting and leave with a high note, there are other stories that are less than pleasant with unfortunate events happening in people’s lives.

For example, one story that I will share with you briefly is about a mother who’s child dropped her coffee mug on the floor. Needless to say it smashed beyond repair.

I remember my sister breaking a small tea pot ornament when I was little and she tried to hide it from my parents by using glue to join all the pieces together. However with the Miami Dolphins, the coffee mug was beyond repair.

So the Mom with her child drove off into town to get another one from the shop where she had originally obtained one that was selling NFL items.

When she was out, her house was burgled and the place was ransacked by three men and one woman. The good news is they were later caught by the police. However, they found that these bunch of criminals had knives on them, which it was assumed they may have used on their victims or to defend themselves.

So if the Mother’s child had not dropped the coffee mug and that triggered the Mother to leave to buy another, then who knows what kinds of horrors may have occurred. I guess everything happens for a reason.

I hope you enjoy reading these stories or chapters that are coming very soon.

Do you have a story to tell that has changed people’s lives? Feel free to share in the comments below.

This site uses Akismet to reduce spam. Learn how your comment data is processed.